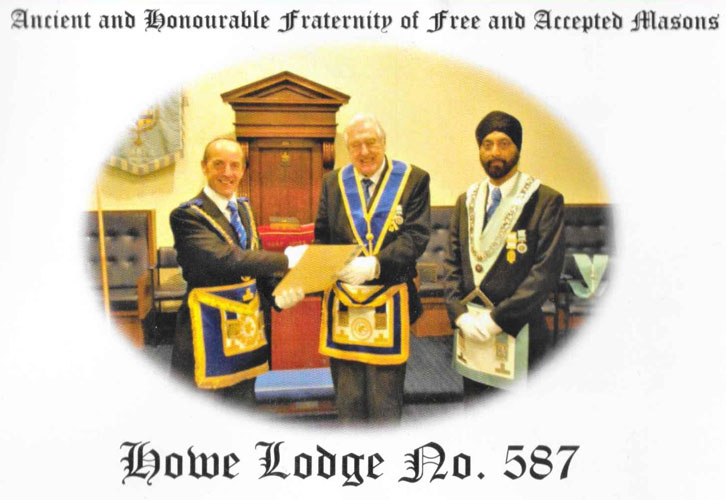 The toast proposed to W Bro Ken Durrands at the Festive Board on the occasion of the presentation of his 60 year Certificate on 10th February 2020 given by W Bro Graham McNicholl PPJGW.


W Bro Ken was born in 1929 in Croxton Kerrial nr Grantham, and still lives in the same cottage which has been in the family ownership for many years. He married Jennifer in 1983 and has two sons. His entry in Who’s who [yes we have a star among us] states that his higher education started at Kings School Grantham and included a spell at Birmingham University, where he completed Post Graduate studies in Mechanical Engineering in 1954, returning to Birmingham University in 1958 to 1961 as Lecturer in Mechanical and Nuclear Energy.

From 1970-1992 he was Rector of Huddersfield Polytechnic, and from 1992-95 Vice Chancellor and Rector of University of Huddersfield. He was made a professor in 1985. In 1992 he was awarded the Honour of Commander of the British Empire by the Queen for services to Education.

Just some of the diverse appointments during a lifetime of service to Engineering and Technology W Bro Ken has had are:
– Head of General Engineering Department, at Atomic Energy Authority at Risley 1961-67
– Member of the Council of Barnsley Colliery 1996-2000
– Governor of Kings School Grantham 1999-2016

But just to give you a flavour of his life of helping others in 1970 he started voluntary work, during his academic holiday times, for the British Council and Office for Overseas Development. He worked in lran, Egypt, Sudan, Ethiopia, Malawi, Gambia, Thailand, China and Indonesia. I could continue but I must start to rightly mention his Masonic career.

W Bro Ken was Initiated in 1959 when a certain W Bro Ronald Gardner, who many will remember as a former Provincial Grand Master in the Mark Degree, was in the chair of Howe Craft. After acting in the usual Junior Offices Ken was asked to return to his employers [Vickers in Barrow] as Technical Director. After a period away from Birmingham, and retirement, Ken re-joined Howe in 1996 becoming Worshipful Master in 2000.
An interesting coincidence is that the very day in Jan 2001 when W Bro Ken came out of the Chair, a young lad named Richard Barker, now WM,
was accepted as a Joining Member of the Lodge. Since leaving the chair Ken has always made every effort to visit Howe Craft and Howe Chapter despite a journey time of approx. 2 hours each way from home and back, a round trip of 150 miles.

To acknowledge the many years of support given to Howe Lodge, the Provincial Grand Master, last year, confirmed promotion for Wor Bro Ken to Past Provincial Junior Grand Warden in the Province of Warwickshire.

W Bro Ken has not enjoyed the best of health in his latter years and has had to endure three major heart operations, the latest being only last year. So I am sure you will join me in wishing W Bro Ken Durrands CBE PPJGW a future healthy long life and toast health and happiness to a remarkable man and an excellent Mason.