The Lodge is the entry level of Freemasonry throughout the world.  Once a member you can visit lodges in most countries.

You also have access to other orders and degrees in this country, depending upon satisfying certain conditions, mostly time and experience of Lodge membership.  You should also be aware that each unit has its own subscriptions to charge, with meals and charity collections to follow!

Royal Arch Masonry, normally referred to as Chapter is, in common in the lodges, ultimately ruled by Great Queen Street in London.  The chapter is attached to a lodge as it is formed, and holds the same number.

Howe Chapter No 587 was formed in 1855, and five of the founders were members of Howe Lodge.

The Chapter meets four times a year 1st Thursday of September, November, and January, and 2nd  Thursday in March.  As with Howe Lodge, it meets at Wretham Road, Handsworth. 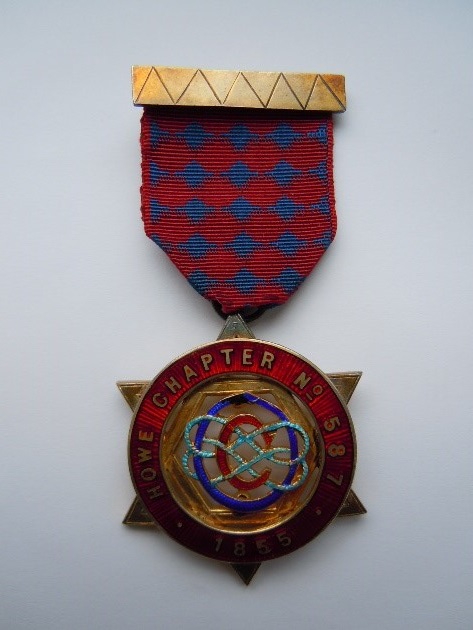 The following is mainly a précis of a book compiled by E. Comp. Fredk. J. Penn, SE in 1912, covering the years 1855-1913. The Chapter is indebted to the Howe Lodge No. 857 for bringing about it’s existence which was recommended by St. Peter’s Chapter No. 607 at a regular meeting at the Star and Garter Hotel, Wolverhampton in December 1854. At a regular meeting of the Howe Lodge No. 857, held at The Masonic Rooms, Newhall St. Birmingham on 8th Jan. 1855 it was resolved that consent be given to a Royal Arch Chapter being attached thereto. Accordingly, the Charter was granted on the 7th February 1855 facilitated by the Most Excellent Companion John Savage who later Consecrated the Chapter and Installed the Principals.  The Chapter was to meet on the second Wednesday in February, May, August and November. The annual subscription was 10s. 6p.

The first meeting of the Howe Chapter No. 857 was held at the Masonic Rooms, Newhall Street, Birmingham on Thursday the 10th May 1855. The Chapter was Consecrated, the Principals Installed, and eight Brethren exalted into Royal Arch Masonry, by the Most Excellent Companion John Savage who was afterwards elected as an honorary member of the Chapter.  Companion Benjamin William Goode was first First Principal, Companion Isaac Hawker Bedford first Second Principal and Companion John Thomas Goode first Third Principal. All three were members of the Chapter of Fortitude which had been Consecrated in 1783..

There were 32 Companions present including the eight who had been Exalted and eleven visitors. In the year 1855, there appears to have been only two other Chapters which met in Warwickshire: Fortitude Chapter No. 43 and Shakespeare Chapter.  The Howe Chapter derived its name from the Right Honourable Earl Howe, who had granted permission for the Howe Lodge to assume his name when the Lodge was Consecrated in 1851. The Right Honourable Earl Howe was Provincial Grand Master for Warwickshire at the time.  When it was agreed that the Companions should dine after the Chapter meeting, it was the custom for the three Principals to pay the expenses, but from 1862 it was resolved that each Companion dining should pay 10 shillings.

In 1863 Bye Laws were framed and a copy given to each Candidate on his Exaltation together with a copy of the Royal Arch Regulations.

In 1866 the numerical strength of the Chapter was recorded maximum at 97 members.

In 1869 the Chapter started to meet at the new Masonic Hall at Temple Buildings, New Street, Birmingham.

The custom of presenting the retiring First Principal with a P.Z. Jewel appears to have originated in the Chapter in 1873.

In 1904, E.Comp.T A Bayliss, feeling that the Charities of the Order should be well looked after, presented a novel Charity Box to the Chapter.

The Chapter attained its Golden Jubilee in 1905, and as a Compliment the Provincial Grand Chapter held their meeting under the Howe Chapter Banner.

The meeting was held at The Masonic Rooms, Newhall Street, Birmingham.

There were 30 companions present and 5 visitors.

and Comp M H Bowater was installed as third Principal

The Chapter was closed but no time recorded.

There were 33 companions and 3 visitors present.

Comp. J Bowater being on active service his installation into third Principal was deferred.

Bro M Myatt of Swan of Avon Lodge No 2133 was proposed as a candidate for Exaltation.

The Chapter was closed but no time recorded.

A Chapter of Improvement was formed in the Province around 1912 and a complete revision of the old Ritual was approved by the Grand Superintendents of Staffordshire, Warwickshire and Worcester. This became the ritual, which the Howe Chapter used.

Up to 1912, nearly seventy Brethren of the Howe Lodge and a little over eighty from the Bedford Lodge had been Exalted into the Howe Chapter.

In 1913 there were 58 Subscribing Members and one Honorary Member.

The history of this second period will, it is assumed, have been reported in a Centenary Brochure. No copy of this brochure has been found to date.

A photograph of the original Charter is contained in the History of the Howe Chapter issued in 1913.

This meeting was held at Francis Road, Edgbaston and consisted of

the Installation of the Principals,  followed after calling off by the Centenary celebration and a banquet.

148 Companions were present including 23 Grand Chapter and Provincial Grand Chapter guests. The Lord Bishop of Birmingham was invited.

A Centenary Brochure was prepared.

1956   The practice of empowering the three principals to appoint officers for the ensuing year commenced.

1961    It was resolved that the Midlands Workings as revised in 1939 and the permitted variations thereto be adopted with the exception that the P.S. and the sharing of the word as from the Old Midlands Workings are to be retained during the obligation.

In March 1980 it was reported that a Square and Compasses engraved with the name of Howe Chapter had been returned by D.A.Light Masonic Supplies who had found them in a box of Jewels purchased.

The agenda of the Convocation held by Dispensation on Saturday, 10th. May 1980 at the Warwickshire Masonic Temple, Clarendon Road, Birmingham,

included the Installation of the Principles followed after an interval by the Celebration of 125years.

There were 29 Companions of the Chapter present, together with 36 visitors including:

After a 10 minute interval the 125 yeas celebration continued.

The Most Excellent Grand Superintendent gave an address on the purpose of the meeting,

The 2nd Principal offered up a prayer of thanksgiving on behalf of the Chapter.

Extracts from the Minutes of the 1st Meeting of the Chapter were read.

Extracts from the Minutes of the Meeting of the Chapter held 100 years ago in 1880 were read.

Extracts from the Minutes of the Centenary Meeting of the Chapter were read.

The original Warrant was read.

E.Comp.K.F.Gerrie,‘’J’’ gave a short history of the Chapter.

An Illuminated Script was presented to the M.E. Grand Superintendent on his election as an Honorary Member of the Howe Chapter by the M.E.Z. E.Comp D.J.F.Rawlins.

The hymn ‘’O God Our Help in ages Past’’ was sung and alms collected in aid of Masonic Charities.

The Chapter was closed.

The first verse of the National Anthem was sung.

The duration of the Convocation was 3 ¾ hours.

Subsequent to the Meeting a Porcelain Commemorative Beaker was gifted to the Provincial Museum.