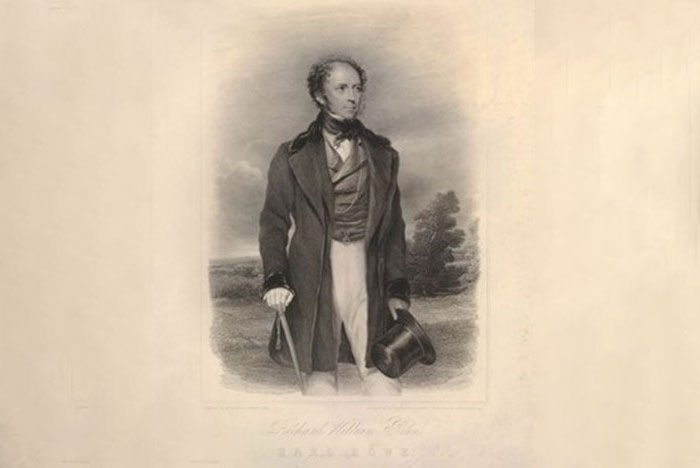 The Hon. Richard William Penn Curzon was born at Gopsall Hall, near Market Bosworth, Leicestershire, on 11th December 1796. He was the son of Hon. Penn Assheton Curzon and Sophia Charlotte Howe, Baroness Howe of Langar.

He succeeded his paternal grandfather as Viscount Curzon of Penn on 21st March 1820, and his mother as the Baron Howe of Langar in 1815.

On the 7th July 1821 he took by Royal License the name of Howe after that of Curzon, and a few days later, on the 15th July 1821 was created Earl Howe.

His office gave him considerable influence over the Queen and through her the King, both of whom liked and admired him. Malicious gossip that he was the Queen’s lover was not taken seriously even at the time and is entirely discounted by historians. It was his position as an extreme Tory, and his strong opposition to the Reform Act 1832 which made him unacceptable to the Government, and he lost  that office for a brief period on account of his voting against it.

William IV’s biographer described him as a man whose vanity and arrogance should have made him insufferable, yet who clearly possessed personal charm great enough to make those who knew him overlook his faults.

Among his many honours were that of the Award of the G.C.H. (Grand Cross of Hanover) 1830, by that of a Privy Councillor 1831, and of D.C.L. (Doctor of Law) in 1835 by William IV at a memorable commemoration at Oxford.

He took little part in the political matters of the day, though he was a Conservative, his support and interest were always given to that party.

He was a Trustee of Rugby School, a Governor of Charterhouse (believed to be the oldest governor of that Institution) and from 1860 Lieut-Colonel Commandant of Prince Albert’s Own Leicestershire Yeomanry Cavalry.

As a Freemason just, a few facts will not be without interest, some of which may not be known to you.

He was initiated in the Tyrian Lodge, Derby, on the 25th September 1815, passed and raised in St John’s Lodge, Leicester in September and October 1821, of which Lodge until his death, he was the oldest member.

He was Worshipful Master in 1822-3, and as such laid with Masonic honours, the foundation stone of St George’s Church, Leicester on 23rd August 1823.

He was exalted in the Chapter of Fortitude attached to that Lodge on 22nd October 1822, was Second Principal from 1823-26, and succeeded Sir Frederick G. Fowke as First Principal 1831-33.

He was one of the founders of the John of Gaunt Lodge in 1846; he was also a petitioner of the Lodge, and countersigned the warrant as deputy Grand Master, a two-fold responsibility unique in the annals of English Freemasonry. He was also a founder member of St. Augustine’s Chapter, which is now attached to the Ferrers and Ivanhoe Lodge at Ashby de la Zouch.

Lord Howe was advanced as a Mark Master in the Howe Lodge of Mark Masters on the 15th February 1859 and accepted the post of Senior Grand Warden in Provincial Grand Lodge, under his deputy in the Craft, Brother William Kelly. On the same day he had laid the foundation stone of the Freemason’s Hall in Halford Street, Leicester, towards which he was a liberal contributor. It is reported that as the Provincial Grand Master he fulfilled all the duties of his office with kindness and courtesy which made him beloved by the Craft. They ever welcomed his genial presence amongst them, and the fact that he able to preside at any of their meeting was anticipated by all the brethren, with the greatest satisfaction.

His devotion to the Church of England and towards the Church Extension occupied a great place in his life. He was a munificent contributor and made good use of those means which Providence had endowed him; and the Church sustained the loss of one of the most true hearted and devoted sons at his passing.

St Peters Church in Highfields, Leicester was built as a memorial to Earl Howe and was originally known as the Howe Memorial Church. The Brethren some years later placed a stained-glass window, as a memorial to the late Earl, and several of the streets of this then developing estate bear tribute to him – Earl Howe Street, Gopsall Street and Twycross Street.

His interest and support of local activities was unbounded. It is futile to attempt to describe all that he did for Hinckley alone. For many years he contributed £50 annually to the Scripture Reader’s Fund, and for more than 20 years he gave £10 to the Allotments Tenants Association, £200 for alleviating the distress occasioned by the cotton famine, besides aiding in the building of schools and many other kindness too numerous to mention.

In spite of this he had been stoned by the lower class stockingers on leaving Hinckley Parish Church shortly after the Reform Bill in 1832, which Bill he had opposed, and because of this incident, it was some years before the former cordial relationship was established between the Earl and townspeople. None the less, their true and profound respect was revealed when in August 1869 a portrait of his Lordship was placed in the Town Hall by the people of Hinckley, in recognition of his Lordship’s great and numerous acts of kindness to the Town, and as a mark of very high esteem towards him by all classes. Subscriptions towards this portrait were restricted to the inhabitants of Hinckley. It was originally hung in the Town Hall and was transferred to the Library when the former building was sold in 1890, and is now displayed, after cleaning and reframing in the Hinckley Masonic Hall.

In 1857 the Knights of Malta Lodge of Hinckley were in some difficulty, when though lack of funds and members, the surrender of the Warrant was contemplated.  With the Installation of the Right Hon. Earl Howe as Master in 1858 the fortunes of the Lodge greatly improved, and its character changed completely – and its prosperity has since been almost continuous.

Gopsall Hall and Park near Market Bosworth, the beautiful home of Earl Howe, was a mid-18th century mansion built at enormous cost by Charles Jennens of Birmingham. Jennens was a man of great wealth, and a Midlands industrialist, famous for his friendship with Handel and the Pretender, and a great patron of the arts. He died without issue in 1773, and the estate and entire art collection passed to his grandnephew Penn Asheton Curzon, and eventually to Earl Howe.

White’s Directory of 1863 describes it as a magnificent structure, with a library, exquisitely chased ceilings, and Corinthian columns. It contained rich works of the old masters, including Murillo, Rembrandt, Canaletto, and Vandyke, and a full-length figure of Handel, who is reputed to have composed his Messiah at Gopsall.

The standards of the communion table in the private chapel, which was stated to be one of the most beautiful in Britain, were made out of the oak in which Charles II concealed himself after the Battle of Worcester.

The Directory also states that the Park and estate were a model for all to see, plentifully stocked with deer and game, and as the Lord of the Manor, he caused most of the houses of his tenantry to be rebuilt in a uniform, neat and substantial manner. He is reputed to have been Godfather by proxy to all the children born on his estates.

The Hall was demolished. Allied troops were stationed there during the Second World War, and it was left in a sorry state, and nothing remains to remind us of it, apart from some old photographs, and some statuary in the garden of Belgrave Hall, the work of the French Sculptor Louis Francois Roubiliac, who did the memorial to Handel in Westminster Abbey, and which was presented to Leicester Museum by Earl Howe, in 1857.

In the Churchyard of St James in Twycross village on the north side, sadly in need of some renovation, stands the unpretentious vault containing the remains of our noble Earl.

The Church itself is a stone building dating from the 13th century. The Howe family pew is on the north side near to the altar, with its two outer pews, for the indoor and outdoor staff, seated in order according to rank. This humble village Church is embellished with some of the finest stained-glass in the world. Much of this came into the possession of George III, having been bought in France by someone unknown, before and during the French Revolution, and was given to Earl Howe by William IV.

The window in the Howe family pew, known as the “Adelaide Regina” contains the Royal Arms of William IV, and on the right, the 21 quarterings of the 21 German states.

The clergy, the charities, every good institution in the county, experienced not only his benevolence, but his beneficence.

Not only was he esteemed as a Landlord, not only as a man distinguished for his high honour, for his hearty English hospitality, for the graceful courtesy of his bearing, but also for his genial and generous sympathy with the pleasures, occupations, and feelings of his neighbours. In all the relations of life he was distinguished by a scrupulously considerate attention to the feelings of others – a quality equally exhibited in matters of the gravest consequence, and of the most trivial import.

Estimable in all the relations of life, he conferred more honour on the Peerage than the Peerage conferred on him. He was one of nature’s noblemen – courtesy and kindness were blended in him, and if one of his famous ancestors – Admiral Richard Howe, known as Black Dick, earned the epithet of the “the Great” for quelling the mutiny of the fleet in Spithead in 1797, he most assuredly deserved that of “The Good”. He never aimed at playing a conspicuous part in politics; he was through a long life a remarkable feature in our social existence as a nation. His position, indeed, constitutes a more curious illustration of English Society, and of the combination of circumstances that tend to give a man influence under it, from the fact that he was not a man of leading intellect and oratorical acquirements; but he was held in the highest consideration by all classes

He was charitable in the highest degree and was ever ready to assist the needy to an extent which never perhaps, can be fully known. He had a kind word for everyone, alike for the artisan as for the peer, and he has gone to the grave having the laurels with which a good and holy life is always accompanied, namely the respect and esteem of all who knew him.

His Lordship died about midnight on 12th May 1870 at his London residence, after being unconscious for two to three days. He died from his old malady, the gout, from which he had suffered terribly for many years.

His mortal remains were consigned to their last resting place on 19th May 1870 at Twycross near Gopsall, with strict abhorrence of everything like ostentation which ever distinguished this much-loved nobleman throughout his days. His life had been one of peace, and like a peaceful but dearly beloved neighbour, he had gone to rest.

The bells of various churches in Leicester were tolled from two to three ‘o’clock during the funeral, and subsequently mourning peals were rung.

Based on extracts from Earl Howe by W Bro F A Stafford for the Lodge of Research No.2429